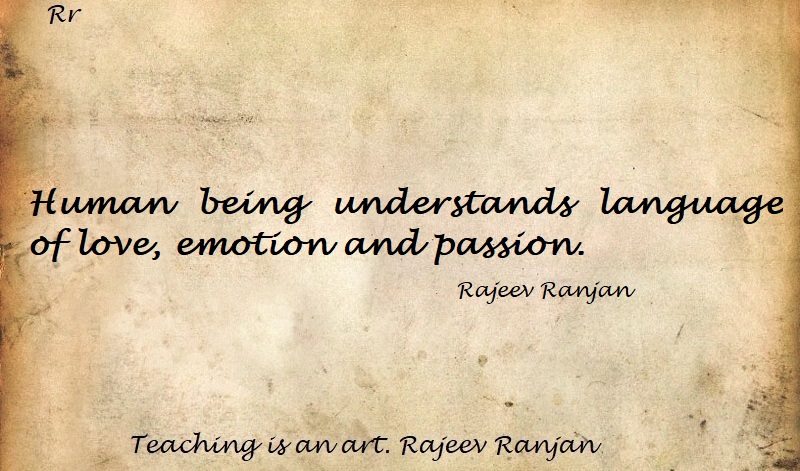 Human being understands language of love, emotion and passion. Educator handles 21st century kids in the school. Kids are active and smart. Sophisticated gadgets become essential need for survival. Nowadays, parent nurtures a child in a nucleus nature. 2010s decade born children are vocal and electronic gadgets lover. Parents wish to provide all the luxuries for their children, which a 1980s-1990s born parent might not used/might, not be available for them to use at that time. Parents are economically sound. 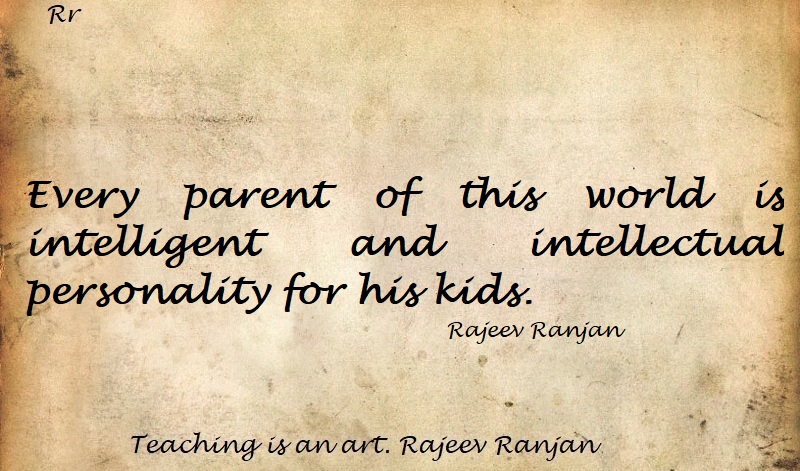 Every parent of this world is intelligent and intellectual personality for his kids. They think surely better for their kids. Children learn all the values right from tender age of habit formation. They watch each and every activity of their parent at home. Nowadays, parent offers his smart phone to the kids in a very tender age because child will be engaged and s/he could perform day to day task at home.  Parent fulfills all the wishes of his kids. This activity satisfies need of both parent and child; parent feels relax and child also feels mental relax with voice, pictures, songs, video, video games etc. Every time we repeat same activities that lay the foundation of negative behavior in a child.

My friend mr. Yadav was in a party with his elder and younger son. His elder son (40 months old) child was watching a serial Bal Hanuman. Younger son (15 months old ) child was crying so Mr. Yadav wanted to give him mobile. When Mr. Yadav requested his elder son to give the mobile for his younger brother, he had thrown the mobile in the ground and ran away from there. I was completely confused to see all these activities. In fact this is common scene in country side as well as urban area. Who is responsible for this act? Who will be cursed for this act? 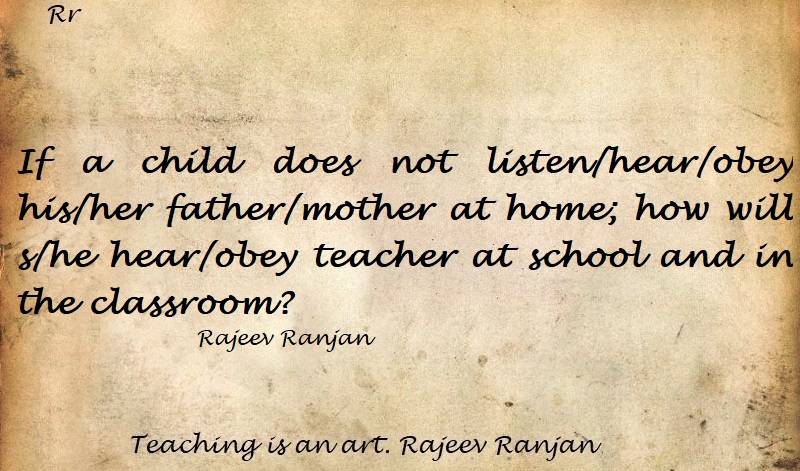 Illiterate, literate, educated and uneducated parent stated several times in informal or formal communication, “ I think, (a) child should not be pressurized (b) I do not give pressure on  my child (c) child does not study in a pressure (d) sir, s/he does not hear anyone in the family (e) sir, s/he is very rigid (f) sir, his mind is very sharp, s/he operates Smart phone very fast  (g) sir, s/he does not want to write on notebook. If I ask something, s/he replies very fast but does not write at all. I stuck at the moment, (a) who will correct them (b) who is responsible for this rigid behavior (c) if a child does not listen/hear/obey his/her father/mother at home; how will s/he hear/obey teacher at school and in the classroom? 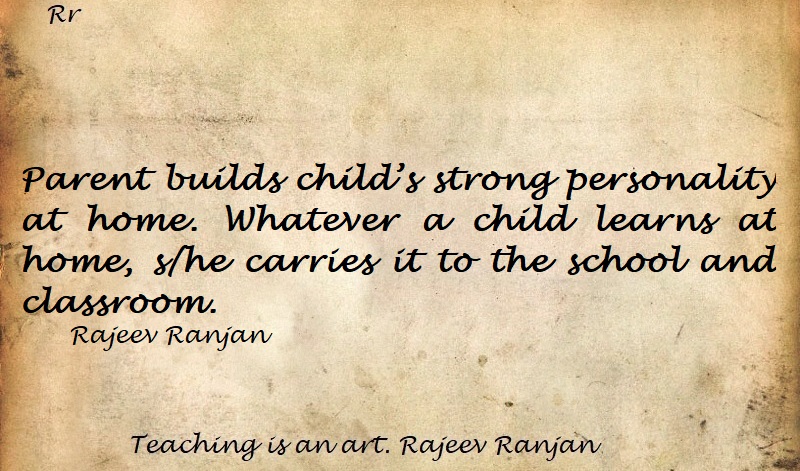 Parent spends a lot of money on paying school fee. S/he wishes her child to be a unique person. Parent builds child’s strong personality at home. Whatever a child learns at home, s/he carries it to the school and classroom.  Parent inculcates different human values at home. 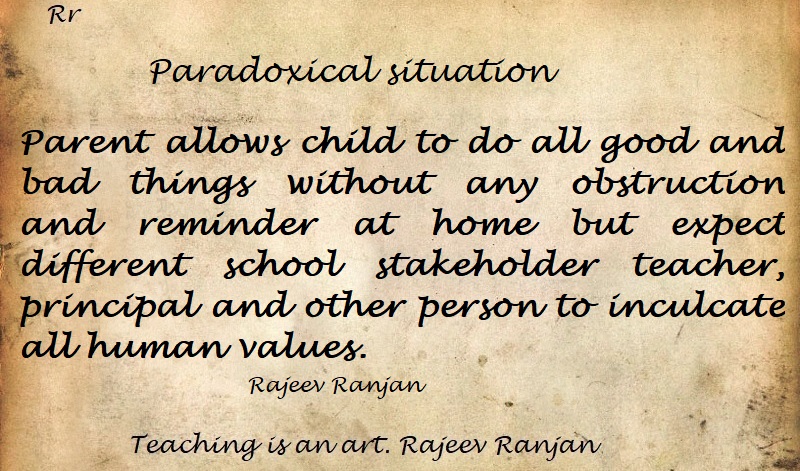 A paradoxical situation is occurred in child life. Parent allows child to do all good and bad things without any obstruction and reminder at home but expect different school stakeholder teacher, principal and other person to inculcate all human values. Homeschooling fails to do it; formal schooling fails to create magical effect in the school which resulted in a conflict personality. 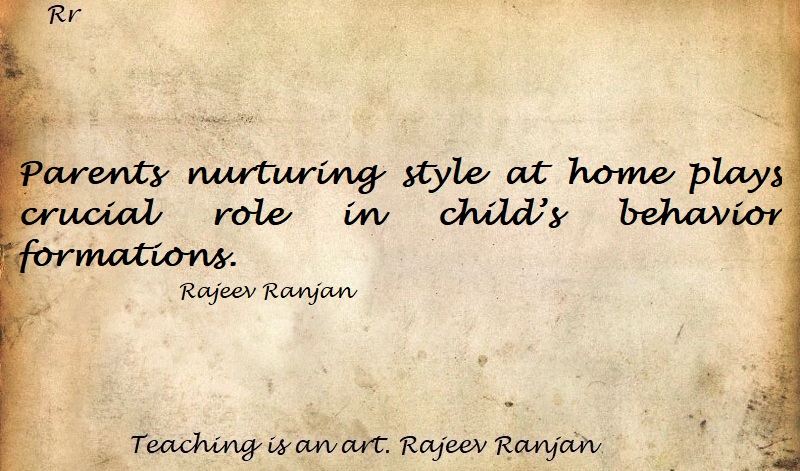 Parent is an image builder.  A child learns a lot of values at home. Parent’s nurturing style makes a big difference. When a child passes through a tender age, parent ignores all his/her mistakes and fulfills all demands unconditionally. Parent wants to provide the best facility available in the society. We treat each and every bad behavior of a child as his/her childish nature but we forget that child is framing a behavior, a habit and an attitude which is not good for both the stakeholders. Gradually, we start noticing that child becomes so rigid and inflexible. Once a child frames a set of good or bad habit, it becomes too much difficult to mould in positive direction. Parent feels unable to control because now child does not listen/obey his parent. Child has his own condition to do several activities. Parent becomes apprehensive and fearful to take necessary action to mould his behavior. 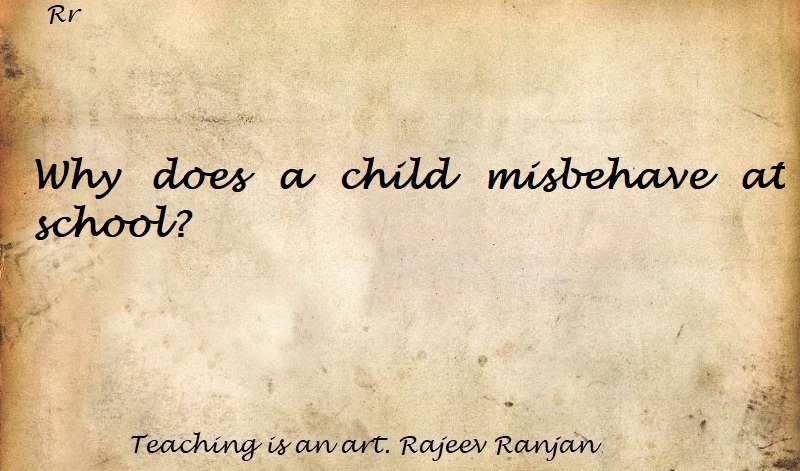 Parents nurturing style at home plays crucial role in child’s behavior formations. Why does a child misbehave at school? Does a parent instill values at home? We observe various reasons for child misbehavior at home and at school.

Child is nature. S/he blooms in the lap of parental field. Proper development of a child is prime responsibility of a parent. Generally we observe in family, society and school that sensible parent nurtures his/her child sensibly. If a parent is not so much caring for his/her kids and s/he does not want to spend time with kids, then his kids do not show moderate behavior at school.

No guardianship at home

Parent physical presence at home makes a big difference but if a parent is present at home but does not care his kids can create too big difference. It creates a void in a child’s life. Sensible guardianship at home helps child to behave properly at home. Child becomes a torn personality.

Lack of poor observation and guidance at home

Mother plays great role in shaping a child as a good human being. Mother usually shares her observation with husband and finally they take a wise decision for their kids. If parent could not keep his/her child in proper observation and if s/he fails to guide child in right direction then child becomes a torn personality.

Over protected and over possessed students

If a parent is so much possessive and over protective for his/her child, then child forms a negative attitude which reflects everywhere i.e. in family, society and school. Over protective child customizes each and everything according to his/her wish and present himself as a victim before parent. Parent takes this issue as an ego-“my son/my daughter”. 21st century kids are smart. They know their parent weakness. This attitude outcome is always negative.  Generally it is observed that overprotective and over possessive parent misbehaves with teacher in school, shouts in school office or so and so many.  Parent’s  pampered students

So many parents feel too much pride for their son and daughters. They pamper their child. Pampered child behaves same as over protected and over possessed child. 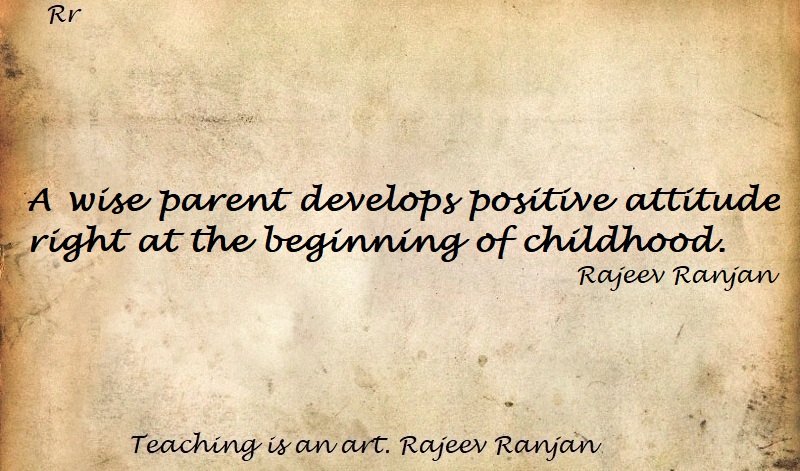 We are living in a globalized world. Everyone has same opportunity to avail existing facilities in this world. A wise parent develops positive attitude right at the beginning of childhood. Gradually, child becomes habituated to show human values with parent, family members, society and teachers. 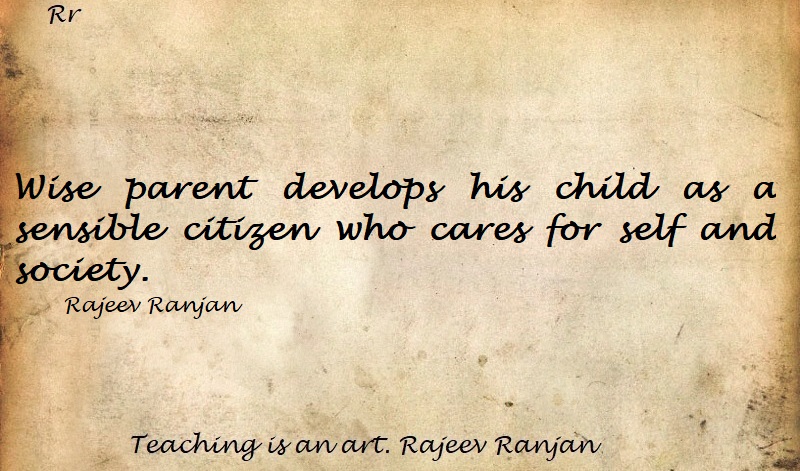 Wise parent develops his child as a sensible citizen who cares for self and society. A child is a child; pure, pious and virtuous. Parenting makes a big difference. Let, be a smart and sensible parent for nurturing a better world citizen ! 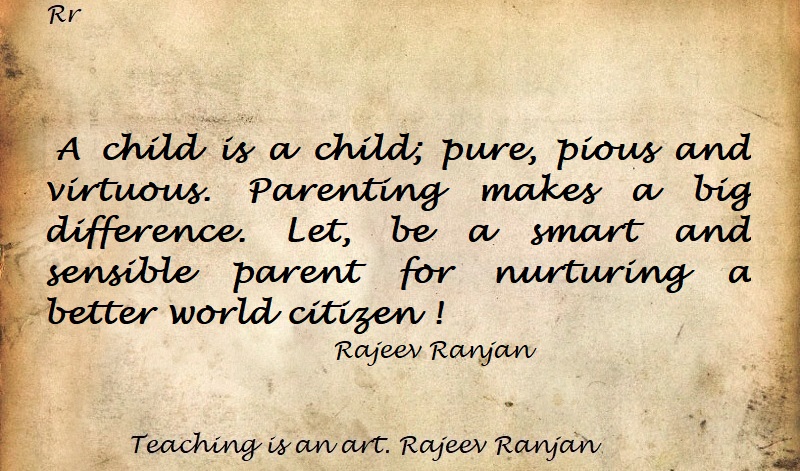